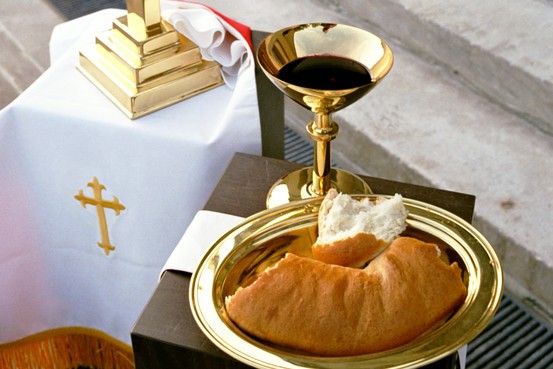 The Eucharist in the Syriac Tradition By Chorbishop Seely Beggiani

It was the divine will of Christ that he would be with us always, and that we are called to be part of his Mystical Body. After His Ascension, Christ continues His work of sanctification and salvation through the mysteries [sacraments]. In the Syriac tradition and in other traditions, the Eucharist is seen as the central mystery toward which all other mysteries are drawn. It is the climax of the process of Christian initiation by which we become disciples of Christ. Baptism and Chrismation prepare believers for participation in the Eucharist. It is the Eucharist that forms Church and unites us to one another in the love of Christ. Through the sacramental body of Christ we grow as members of the Mystical Body of Christ.

Baptism, Eucharist, and the Community of Faith

The Syriac writers presume a direct relationship between baptism and the Eucharist. If Baptism incorporates the candidate into the Church, it also enables him to have access to the Holy Eucharist which is the cause and manifestation of that incorporation. Aphraat teaches in his Demonstration No. 12 — On the Passover: “When his heart has been circumcised from evilworks, one then proceeds to Baptism, the consummation of the true circumcision; he is joined to the people of God and participates in the Body and Blood of Christ.” St. Ephrem sees a direct link between Baptism and the Eucharist when he declares: “Once this womb [the baptismal font] has given birth, the altar suckles and nurtures them: her children eat straight away, not milk, but perfect Bread!” (Hymn on Virginity, No. 7).

Ephrem summarizes his teaching in his Hymn on the Epiphany, No. 3: “The figure has passed [that is, the Old Testament types], the truth is realized, with oil you have been signed, by baptism you have been rendered perfect, you have been mingled in the flock, you have been nourished with His Body.”

Old Testament Types of the Eucharist

The Syriac writers sought to learn the meaning of the Eucharist by meditating on the Scriptures where they found a dazzling variety of types foreshadowing the Eucharist. James of Saroug draws a parallel between the “deadly fruit” eaten by Adam in the garden, and the “Fruit of Life” that brought Adam and his descendants back to life. The manna which came down from the heavens and fed the Jews in the desert prefigures the “Food of Life” who would give of Himself to feed the world. The bread of the Last Supper meal becomes the Body of Christ to be eaten by human beings.

James of Saroug recalls the practice described in the Book of Numbers (cf. Numbers 19) where God orders that a red heifer be slaughtered as a sin-offering and its blood sprinkled on the meeting tent. James sees the red heifer as a type of the future Christ who, through his death, would achieve forgiveness of sins. The Mosaic law s prescribing the weekly offering of shewbread (cf. Leviticus 24: 5-9) foreshadows the unbloody sacrifice of the Eucharist.

Other types of the Eucharist include: the jug of oil of the widow which was never exhausted in giving nourishment to the widow, her son, and Elijah (cf. I kings 17:8ff); and the body of Eliseus which was God s instrument to restore life to the dead boy, and thus is a type pre-figuring the life-giving body of Christ (cf. II Kings 4: 32ff). Finally, there is the type of the offering of bread and wine by Melchizedek which foreshadows the end of bloody sacrifices (cf. Gen 14:18).

Symbols of the Eucharist

The Syriac writer James of Saroug also speaks about symbols of the Eucharist. For example, in the story of the good Samaritan, we are told that the Samaritan uses oil and wine to treat the wounds of the Jew who had been attacked by robbers. For James, the oil is a symbol of the baptismal seal and the wine symbolizes the cup of wine, which becomes the Blood of Christ given to heal the wounds of sinners.

The “burning coal” by which the seraph purified the lips of Isaiah represents the power of the body of Christ to purify us of our sins. It also represents the fact that Christ immolated himself for us through his sacrifice on the altar of the cross.

Syriac writers often see the pearl’s qualities of fire, light, and purity as a representation of Christ.(There was also the ancient legend that pearls were formed virginally through the action of lightning on the oyster.) However, James of Saroug, reflecting on the biblical parable of the pearl of great price, considered the pearl as signifying a precious possession. It therefore symbolizesthe Eucharist, the “life–giving pearl”, for which we should sacrifice all that we have.

For the Syriac writers the Incarnation is the climax of God’s plan of creation. God in Hisbenevolent love for us became one of us in order to save us. St. Ephrem views the humanity of Christ as the instrument of salvation. For him, that same body in which Christ healed humans and rose again, He gave us in sacramental form to heal us, to incorporate us in Him in the Church, and to give us a pledge of His resurrection.

St. Ephrem often meditates on the presence of the divine in the bread and wine. In his Hymn onthe Faith. No. 6, he declares: “For in the Bread is eaten a strength not to be eaten and in the Wine is drunk a might not to be drunk…”

In fact, St. Ephrem draws a parallel between the divine action at the Incarnation and at the Eucharist. He declares in the Hymn on the Faith. No. 10:

The Syriac fathers were aware that in the Eucharist we are dealing with a great mystery, one that could be grasped only by faith. St. Ephrem believes that the spiritual eyes of faith are able to pierce through shadows and forms and arrive at reality. Using his poetic talents he sometimes tries to express his theological views through the use of narrative such as a meditation by Mary on Christ that he constructs in his Hymn on the Nativity, No. 11:

For [when] I see that outward form of Yours before my eyes, the hidden Form is shadowed forth in my mind, O holy One.
In your visible form I see Adam, and in your hidden form I see Your Father, who is joined with you.

Have you then shown me alone Your Beauty in two Forms?
Let Bread shadow forth you, and also the mind; dwell also in Bread and in the eaters thereof. In secret, and openly too, may your Church see You, as well as Your Mother.
Lo! Your Image is shadowed forth in the blood of the grapes on the Bread [the intinction during the Divine Liturgy]; and it is shadowed forth on the heart with the finger of love, with the colors of faith.

The Eucharist as Sacrifice

The Eucharist is the sacrifice by which Christ offered himself for our redemption. Foreshadowed by the Passover Lamb of the Old Testament which liberated the Jews, Christ is the “Lamb of God who takes away the sins of the world” through the shedding of his blood on the cross. ForJames of Saroug, Christ has immolated Himself in the presence of the Father. The bloodshed on Golgotha is the “medicine of life” for the world.

The Doctrine of the Eucharist

The Syriac world often sought to express its theological beliefs in its worship. It truly exemplifies the ancient adage that the “law of faith is the law of prayer; and the law of prayer is the law of faith.” While the Syriac world in its history had to deal with many major and difficult doctrinal issues, its belief in the Eucharist and the real divine presence in the Eucharist were never questioned.

The Eucharist as Nourishment

The Syriac writers view the Eucharist as divine nourishment for our spiritual journey. In his homily on Our Lord, St. Ephrem explains that our deficiency is filled by the “leaven” from the Body of Christ. Christ who possesses fullness and life in His body supplies for our deficiency and gives life to our mortality.

James of Saroug teaches that just as we have received the gift of immortal life freely, we should give freely to those most in need. Those who receive the Body and Blood of Christ ought to give bread to the hungry and drink to the thirsty.

The Eucharist as Pledge of Immortality

In his Hymn on the Faith, No. 10, St. Ephrem declares in poetic form that the power of the Eucharist overcomes the power of death: “Your Bread kills the Devourer [Death] who had made us his bread, Your Cup destroys death which was swallowing us up. We have eaten you, Lord, we have drunk you, not to exhaust you, but to live by you.”

As noted above, the Eucharist is the fruit of the redeeming sacrifice of Christ on the cross. The one sacrifice of Christ merits forgiveness for all people for all time. In the Syriac tradition, as well as that of other Churches, the Eucharist is seen as forgiving sin. This is the theme repeated in all the Anaphoras of the Syriac tradition. James of Saroug refers to the place of worship as the

An ancient Syriac homily on the sinner woman in the Gospel attributed to a Bishop John teaches the following: “Behold, it is written of the sinner that she kissed only the feet of Christ, but it is not written that she received his body. And if the kisses of a sinner, given with faith, shook and overthrew the fortress of her debts, how much more we ourselves who embrace Him with love and receive Him with faith, shall we be purified of our faults and sins, and He will answer our requests.”