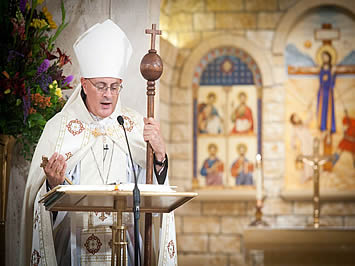 Every human being has a vocation from God, since each of us plays an essential part in God’s plan. Christ’s call to discipleship is extended to each baptized person, since each of us has a role in bringing about the Kingdom of God. Through baptism and confirmation we become a“priestly people”, a “royal priesthood”. The laity in the Church belong to the world of the sacred, not the secular, and have a priestly mission to perform. However, it is part of the plan of salvation that certain members of the Church be ordained to a special ministry of leadership, of sanctifying and of teaching. Thus Christ established the Mystery of Holy Orders which includes the offices of bishop, priest and deacon. In the Maronite tradition we also have the ministries of subdeacon, reader and cantor. In this article we shall speak about the Order of Priesthood.

The Maronite tradition attributes many characteristics and roles to the Order of Priesthood. Two of the more prominent ones are the roles of mediator and steward. The priest has been given the keys to the treasure of the Kingdom so that he might distribute its riches to those who have need of it. Through offering the Holy Sacrifice, he opens the door of repentance, and thus obtains forgiveness for himself and for his flock. As the mediator between God and humanity, he is given the hidden mysteries and proclaims God’s revelation.

The priest is also the steward of the Divine Mysteries. The idea of steward impresses on us that the priest does not act in his own name but in the name of Christ. He has been given talents by his Master and instructed to make them fruitful. His main goal is to be a good and faithful servant.

The Service of the Word

The Rite of Ordination begins with the Service of the Word. An opening qolo (hymn) prays that the candidate for priesthood receive God’s forgiveness, that God the Father sanctify him, that God the Son instruct him in wisdom as He did the disciples, and that God the Holy Spirit illuminate him as He did the apostles through tongues of fire. It also reflects on the fact that in the earthly priesthood, the infinite God is held within consecrated hands.

Another qolo recalls the priesthood of the old covenant from Moses to Aaron to John the Baptizer and petitions that the same Spirit who spoke through the prophets and came to rest on the Apostles will now descend on the candidate.

In the Hoosoyo (prayer of forgiveness) we are taught that God desired that human beings join in the angelic act of divine praise. The Hoosoyo prays that the candidate for the priesthood be a steward of the Divine Mysteries, a trustworthy leader, a teacher wise in virtue, a minister who has the keys to the doors of repentance, a devout priest diligent in good deeds and increasing the talents given to him.

The Rite of Ordination Presentation and Election of the Candidate

Following the Scripture readings, and the celebration of the Eucharistic service, the proper Rite of Ordination begins after the communion of the Bishop and the concelebrants, and before the communion of the laity. A priest-sponsor presents the candidate to the Bishop and the congregation responds by praying to the Lord for him. This action signifies that the priest is called from among the people in order to offer sacrifice to God on behalf of the people, although he is aware of his own unworthiness. The affirmation of the congregation reflects the ancient practice where the laity had a role in helping to choose a suitable candidate to serve in the priesthood.

The Bishop, representing the Church, recites the prayer of election declaring that God has called the candidate to priestly ministry. He recites an ancient prayer which celebrates God’s ever– abiding care for the needs of His people. “The divine grace and heavenly gift of our Lord Jesus Christ, which at all times satisfies our needs, cures our infirmity, heals our wounds, forgives our sins and attends to the children of the Holy Church, is calling and electing, by God’s choice and His divine will, and by ecclesiastical authority, this servant of God here present. . . .”

The prayer of election then describes the new priest as being betrothed to the altar. It concludes by petitioning that the divine grace may dwell on him and the Holy Spirit overshadow him.

Imposition of Hand and Prayer of Consecration

In the Maronite Rite of Ordination the Bishop imposes his hand twice on the candidate, each time accompanied by a prayer of consecration. The first prayer, after recognizing the awesomeness of God, notes that in the divine plan priests and bishops were established to serve God and to shepherd His flock. The Bishop prays that the candidate receive the Holy Spirit so that he may carry out the angelic ministry, serve the divine teaching and confirm and upbuild the Church. We see in this prayer a reaffirmation that the priest is called to unite the divine praise of the Liturgy on earth with the angelic choir in heaven. He must preach and live the Gospel and strengthen and nourish the Church of Christ. The second prayer of consecration stresses that the priest is called to offer sacrifices and spiritual offerings.

An alternate prayer of consecration accompanies both the fluttering and imposing of theBishop’s hands on the head of the candidate as a sign of the coming of the Holy Spirit. The candidate’s face is covered with the Bishop’s phaino (outer vestment). The prayer asks that the priest be enabled to preach the Gospel, and through the new birth of Baptism offer sacrifices and spiritual gifts for the renewal of the people. The priest should be a lamp giving prophetic witness and should strive to spread the good news through the whole universe.

The Anointing of Hand

Because the priest is called to handle the Holy Mysteries throughout his ministry, his hands are consecrated by being anointed with myron (oil of chrism). The prayer accompanying this rite recalls the transmission of the priesthood beginning with Adam and extending to the present day. Adam was created in the image and likeness of God, and called to chant the glory of God and give thanks like the angels. Being clothed with glory, he was constituted high priest. By sinning he lost his ministry, but was subsequently redeemed through the mercy of Jesus Christ whotasted death on Adam’s behalf. On the Mount of Olives at the Ascension, Christ transmitted the priesthood to the blessed disciples. Having received the Holy Spirit, they went out to make disciples of all nations. They spread the priesthood to the far corners of the earth. The Bishop then declares that, while unworthy, he has received the priesthood from the disciples and prays that it be passed on to the candidate through the imposition of his hands.

Vesting of the New Priest

After formally announcing the ordination, the Bishop vests the new priest with his robes ofoffice. The amice (hood) is referred to as the “helmet of salvation”. The stole is called the stole of priesthood. The prayer accompanying the giving of the belt petitions that the servant of the Lord be bound as a priest. In vesting the newly ordained with the phaino (outer vestment), the Bishop again declares that the priesthood is for the peace and upbuilding of the Holy Church.

Transmitting of the Functions of the Priesthood and Accompanying Processions

A major element in the Rite of Ordination is the handing on of the functions of the priesthood. These consist of the censer, the Book of Gospels, and the Eucharist. In a sense, these three elements summarize the ministry of the priesthood. As we have noted, a major role of the priest is to mediate God’s forgiveness to the people who are seeking reconciliation. The priest offers incense in the divine liturgy as a sign of purification and to petition divine mercy. Secondly, the priest is called to carry out the prophetic role of preaching and living the Gospel. Thirdly, the mystery of priesthood, as all the mysteries established by Christ, are directed to the Eucharist.

As the newly ordained receives each function of office, he is led in procession among the people because the priesthood is for the service of others. He is accompanied by two priests who symbolize the continuity of the priesthood through time.

The Bishop burns incense in the censer and hands it on to the new priest. Then he places two stoles around his neck. With these stoles, two priest-sponsors lead the new priest around the church while he is incensing the congregation. The qolo (hymn) which accompanies the procession with the censer recalls that Christ established the Church and founded it on the apostles. It teaches that the Church of the new covenant was already prefigured in Moses. On Mount Sinai, Moses saw the splendor of the House of God, and the ark of the covenant in which God came to dwell was a type of the future church.

The new priest receives the Book of Gospels from the Bishop and is led in a second procession. The accompanying qolo recalls that Christ betrothed Himself to the Church, redeemed His Bride by His death and freed her from error. The children of the Church receive a pardon from their sins through the sacrifice of the Body and Blood of Christ.

Upon returning to the sanctuary, the newly ordained reads the Gospel passage from John 21:15-19. In this text Christ asks Peter three times: “Do you love me?” To Peter’s affirmative reply, Christ responds: “Feed my sheep.” This passage highlights the fact that the ministry of the priesthood is based on the love of Christ. As Christ is the good shepherd who was willing to lay down His life for His sheep, so the essence of the priesthood is to minister to the flock of Christ with love and self-sacrifice. The English word Pastor’ is really the Latin term for shepherd’ and perhaps using the title shepherd for parish priests would be more meaningful, as is the custom in Arabic.

The Bishop gives the new priest the Eucharist to carry in a third procession. The accompanying qolo recalls that Christ nourishes us with His Body and Blood for the forgiveness of our sins. The Church is invited to eat “fire in the bread and drink spirit in the wine”. (Fire in the Scriptures is used to denote divine presence.)

At the conclusion of the three processions, the Bishop places the hand cross on the head of the new priest and offers a prayer which recalls again that God has established the priesthood in the midst of the Church for service at His holy altar. He prays that through the descent of the Holy Spirit the priest will minister in God’s service and present offerings and pleasing incense. the bishop petitions that God will give the new priest the gift of the Word and open his mouth in knowledge, that the priest intercede and implore God for the faithful, that he visit orphans, support widows, convert the erring and help strangers.

The communion of the faithful follows. The service of ordination concludes with a final exhortation by the Bishop to the new priest.