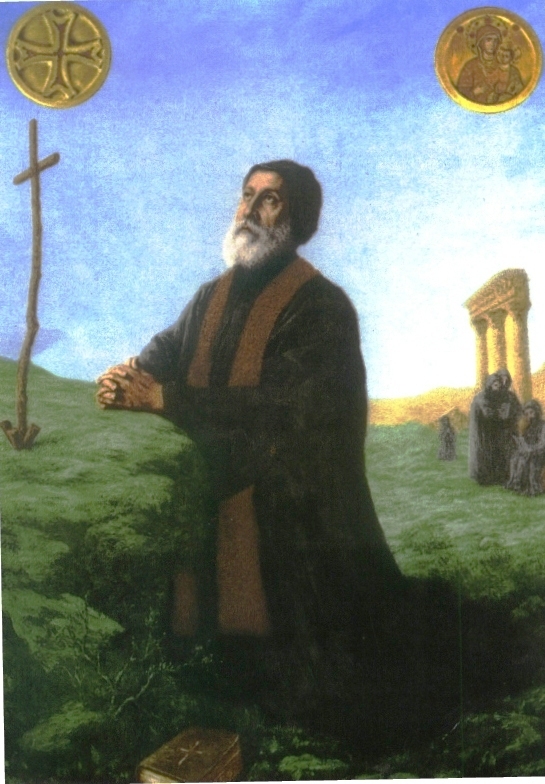 The Syriac Maronite Church is an integration of three traditions:

Antioch: A center of commerce and communication in West Syria of Greek and Syriac influence. It gave the Maronite Church its biblical theology and use of the literal sense of scripture.

Edessa: A prominent city, where St. Ephrem lived, in ancient Mesopotamia of semitic culture and Syriac poetry. Both influenced the prayer and hymnody of the Maronite Church.

Mount Lebanon: A region in the Middle East of Lebanese culture and tradition. It provided a haven for the Maronite monastic life, worship and traditions begun by Maron.

The Maronites living in the countryside near Antioch resisted extensive Greek influence and retained the Syriac culture and language of Edessa. Thus the theology, spirituality and liturgy developed according to biblical themes rather than philosophical thought.

Maron, a priest and hermit, known to John Chrysostom, walked the land once traveled by Peter and Paul. On the banks of the Orontes River, Father Maron converted an old pagan temple into a church. He spent his life teaching about the faith and ministering to many people with the gift of healing and counsel. Over 800 monks later followed in his footsteps. These early followers of the lifestyle and way of Maron were known as MARONITES.

Their history reveals great sacrifices of their lives and possessions for their religious convictions and freedom. They defended the Council of Chalcedon (taught Christ is God and man, and Mary is Mother of God). Maronites came to Mount Lebanon and later elected John Maron as their first patriarch in 687. By this, the Maronite Community became established as an organized church and Lebanon became the third geographical center of influence for Maron’s family of faith.

From its monastic origins to today the Maronite Community of faith includes several religious orders of monks and sisters whose important ministries to the Church provide continued nourishment, growth and maturity. Maronites are Catholics of many nations and diverse cultures. Presently, the Mother Church is in Lebanon and daughter communities exist in ever nation of the world. Often the sons and daughters of Maron are referred to as Beit Maroun, (the house of Maron).

A View of God

God is Mystery: The Maronite mind has always been in awe of this mysteriousness of God and presumes a great distance between Creator and creation. However, the distance is bridged by God’s self-revelation.

“We are able only to say God is, but to research how he is, the door is closed.” Narsai

The reason is the inner life of God is a divine mystery beyond limited human knowledge and understanding. Two things account for this: 1)the Jewish Christian origins of the Maronite Church, and 2) its familiarity with the scriptures.

Yet, the process leads to mystical union with God- for the more one loves God, the more one encounters God. The search for God then leads to wonder, communion and prayer. “When one tries to describe the mystery of God in words, e can only stammer.” Ephrem

An Approach to Prayer

Prayer is the process of “being” in the presence of God Who is always present to all creation. To encounter creation and humankind is to meet and embrace God.

The Maronite tradition sees the HEART as the focal point for all life. The heart is the place for the deepest communication with and presence of God. To live is to pray, and to pray is to live in the awareness and experience of all creation as made in the image of God.

Prayer of the heart means light, clarity and inner vision. The heart becomes the altar for prayer-offering. The Spirit overshadows, accepts and transforms the prayer. Note well the link between the overshadowing of the Spirit at the altar of prayer and the altar of Eucharist. To pray from the heart (center) is to be continuously filled with a remembrance of God, here and now, by the Spirit’s infusion.

Thus prayer is the state of lovingly remembering God so that the person experiences His presence and communion. It is the gift of inner vision which sees all created things as transparent- God-touched, transformed and divinized.

While one is unable to know God himself, he can know God who manifests himself through nature, humanity and scripture. St. Paul Writes: “Since the creation of the world, invisible realities have become visible, recognized through the things God has made” (Rom 1:20).

Genesis indicates that the hidden God revealed Himself through His creating word. Since God spoke it into being, creation is a great symbol of the Creator.

God said: “Let there be light, and there was light.” Then Jesus proclaimed: “I am the Light of the world.”

Creation: Everything bears the imprint of the hidden God. Man/Woman is the image of God who gradually reveals Himself in the world he creates.

Humanity: God inspired rulers to act on His behalf; chose prophets to interpret the meaning of His deeds and guided authors to record His words.

Scripture: God’s progressive revealing of Himself sets the stage for His fullest self-communication in Jesus Christ, the Word made flesh.

God imprints upon nature and in scripture symbols and figures which manifest His son. Thus the purpose of the created universe is to reveal Christ and to prepare humankind for His coming in the flesh and in glory.

This spirituality teaches that the “image of Adam” was not destroyed but deformed by sin and is recreated in a new splendor by Jesus the Savior.

“In the beginning, You formed us from the earth in Your image and gave us the joy of paradise. When we transgressed Your command, You did not reject us, but called us back by the law, as a merciful Father. You guided us by the prophets. When the time was fulfilled You sent Your son into the world that He might renew Your image. He became man by the Holy Spirit and the Virgin Mary. He accomplished all things for the salvation of the human race” (Anaphora of James, the Apostle).

A Life-Journey From Earth to Heaven

The world is improving with time and it moves from incompleteness to completeness. The interaction between God and humans in Christ is to prepare and teach them for their divine vocation- the kingdom.

Jesus, in His birth, death and resurrection transforms, divinizes and completes humanity.

“You have united Your divinity with our humanity. You have joined Your Imortality with our mortality. You have taken what is ours and given us what is Yours for our life and salvation” (Maronite Liturgy).

A Maronite Approach to Scripture

Ephrem taught: “When you look, the symbol of Christ is present. Where you read, you find His types”

The monastic spirit of the Maronite Church opens the door to a life of simplicity a vision of hope and an attitude of readiness. The human vocation is to become like God, but sin interrupts this call. Conversion and purification invite a person to renewal, new life and intimacy with God. Thus, human beings become what God intends for them-Children and heirs of the kingdom.

For a Maronite Christian the spiritual journey to the kingdom is described in terms of Birth from three wombs which the Holy Spirit energizes with Life.

The Maronite Liturgy is called Service of the Holy Mysteries and derives from the Syriac :.ministering at the altar”. Liturgy, Qourbono and other words are used.

The entire liturgy (prayers, gestures, music, art, and architecture) reflects from beginning to end, glory to God for His loving mercy and the call of the worshipper to forgiveness and rebirth.

The attitude of the Maronite worshiper is unworthiness of and readiness for the second coming of the Lord Jesus. “Blessed is he who has come and will come in the name of the Lord” (Maronite Liturgy).

The believer is likened to a ship opening its sails to the Holy Spirit and making its maiden voyage home to the harbor of safety.

The Holy Spirit is the principal minister in the liturgy. He is the beginning, the end and the perfection of all things.

The tone of the service is simple and direct in the monastic spirit of its founder, St. Maron. A balance is achieved between the hiddenness and the presence of God in Jesus.

The worshiper becomes involves in a human-divine drama which unfolds before and within him and makes once a sharer in the Kingdom. The Mysteries/Sacraments become the meeting point for the believer and God.

The communal aspect of worship is emphasized by the fact that the community is absorbed in a continuous dialogue with the celebrant who mediates on behalf of Christ the High Priest, and the deacon who serves an instructing and coordinating role.

(reprinted with permission from “Being A Maronite Catholic” by Msgr. Ronald Beshara)